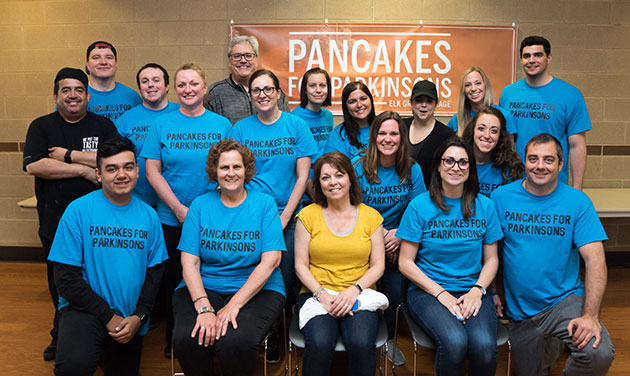 “Let them eat pancakes,” said Emily Ebert, Pancakes for Parkinson’s organizer and seasonal Tasty Catering employee. Ebert also works for their sister company, nuphoriq, and is a member of Tasty Cares. It was five years ago when she, her family, friends and fellow Tasty Cares volunteers first gathered together at Elk Grove Village’s Rainbow Falls Community Center to raise awareness about Parkinson’s disease and funds to benefit The Michael J. Fox Foundation for Parkinson’s Research.

Tasty Cares is a group of employees within the 89 Holdings family of companies—such as Tasty Catering, That’s Caring, nuphoriq and more—who are committed to bettering the lives of employees, their families and the community through volunteering, outreach and community involvement.

In 2012, Ebert first approached Tasty Catering about cooking pancakes and lending their event staff and expertise to raise money for the MJF Foundation. Every summer since, we have provided the materials, cooked them on-site as well as provided beverages and fruit, greeted guests, sold raffle tickets and performed setup and cleanup duties for the entire duration of the event. We’re honored to be a part of an event that reinforces our company’s values around teamwork, innovation and community involvement with other local companies wanting to make a difference.

Since 2012, Pancakes for Parkinson’s has raised over $20,000 for the MJF Foundation, and we’re honored to have made and served close to 2,000 delicious pancakes.

On May 19th, over 200 people attended the annual event in Elk Grove Village, which included unlimited pancakes, a photo booth, children’s activities, outdoor games and raffle prizes. This year, everyone raised a total of $5,255.

Fun and Games for All Ages

The day was covered in syrup, paint and fun. Many children lined up for V’s Creative Face Paintings, gallivanting through the community center with glittery faces and painted snakes covering their arms. Others played Twister and Jenga or sat at tables, adorning masks with crayons and stickers.

Several booths were set up to help raise funds and provide education. Over 100 multi-colored Pure Vida bracelets were purchased. Loyola University Physical Therapy Group, who works with and delivers therapy to Parkinson’s patients, was on hand to provide information.

At least 30 vendors contributed raffle prizes, like a Lou Malanati’s gift certificate and a signed and framed picture of the Blackhawks’ Patrick Kane. Local businesses like Jarosch Bakery and the Great American Bagel contributed food and baked goods for hungry attendees.

Why This Cause Is Important to Us

Close to five million people worldwide live with Parkinson’s disease, a chronic disorder of the central nervous system that causes tremors and sometimes physical incapacitation. There is no known cure, which is why funding that goes to breakthroughs in research is important to sufferers and their families.

Organizer Ebert lost her grandfather to Parkinson’s disease in 2010. Prior to his battle, his family remembers him as a person who had a contagious sense of humor and a devout love for life and people. He was an independent podiatrist who would often go out of his way for his patients.

“The Pancakes for Parkinson’s event is a reflection of my grandfather,” says Ebert. “It is meant to be fun, thoughtful and caring—just like him!”

If you’re interested in learning more about Pancakes for Parkinson’s or ways you can join in next year’s fun for a good cause, visit www.pancakesforparkinsons.com. 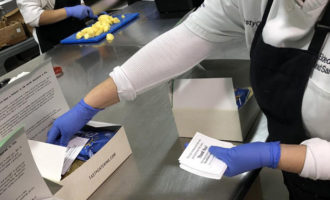 Forbes.com Shares How a Purpose-Driven Culture Is Helping Tasty Catering Survive and Thrive in Turbulent Times 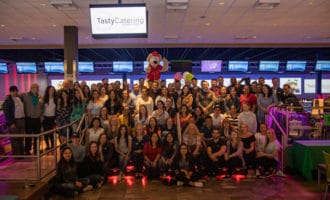 Our Favorite Moments and Reasons Why We Love Working Together 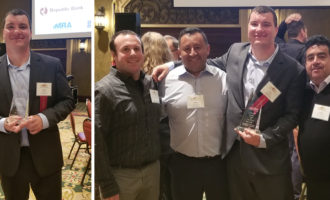 Tasty Catering by the Numbers